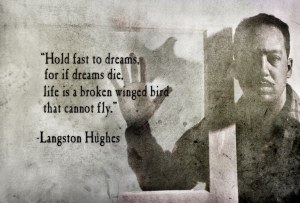 As I write more and learn more about writing, this really and truly the only thing I want to do. However, I’m not naïve enough to believe that I have arrived—that my writing is critically spectacular and I can totally support my family on it. In fact, it’s quite the contrary. I have stories that I want to tell that my limited writing skill is totally unable to do justice, so I’ll keep those ideas close to my heart until I’ve written a book or three.

In recent weeks, all the hoopla around Fifty Shades has made me realize something—and this has played out in other mediums of entertainment as well. Your creative offering doesn’t have to be the best one on the market; it just has to have that special something that propels it forward in the collective hearts and minds of willing consumers. And it has to enter the market at just the right time to catch that spark that pushes it into the stratosphere. This has happened with The DaVinci Code, Twilight, The Kite Runner, The Help and many, many other stories.

Somehow, E. L. James was able to bottle that lightening with her Fifty Shades stories. There has been much said about it as she has racked up the notoriety, accolades, and denigration for this trilogy of books. It underscores that people have widely varying opinions on everything, and aren’t afraid to voice them across the internet airwaves.

My only opinion now is that James has received her seven-figure payday, so we might as well move on from beating the dead horse that has become a thoroughbred. I am not and never did hate on Ms. James. I just hope Vintage helps her to improve the quality of the 750,000 paperbacks they will glut the market with.

I have written a novella that I am busy editing for publication on Amazon KDP to build myself a following. I have only been a modestly successful writer by fandom standards, so I don’t have the luxury of the legions of fans Ms. James has taken with her into superstardom. I want to build a base of readers who will like my writing style enough to tell a friend, who’ll tell a friend, and eventually they will happily read my offerings as eagerly as J.D. Robb’s and James Patterson’s fans do.

Several weeks ago, I entered an original fiction contest at The Writer’s Coffee Shop and as I await their decision on its suitability for publication, I can’t help but be excited that I am moving forward with my own dream of getting a book in print. Will my romantic drama set in exotic Paris be a hit? I have no earthly idea. One thing I do know is that if it is not accepted by TWCS, I won’t stop there. I will continue to tweak my stories, to hone my craft, until I have a novel in print somewhere.

The only thing that matters to me now, is that I’m finally going to get to do something I’ve wanted to do for a very long time. If my writing career goes nowhere, at least I’ll be able to say I’ve realized my dream and removed another item from my bucket list.

One thought on “Realizing My Dream”

That’s The Way Of The World

83219mombasa
CHANGE IT UP EDITING

I love words. Especially yours. Let me help you say it the way you mean it!

Aspiring novelist. Avid reader of fiction. Reviewer of books. By day, my undercover identity is that of meek, mild-mannered legal assistant, Kate Loveton, working in the confines of a stuffy corporate law office; by night, however, I'm a super hero: Kate Loveton, Aspiring Novelist and Spinner of Tales. My favorite words are 'Once upon a time... ' Won't you join me on my journey as I attempt to turn a hobby into something more?

Howdy! We're the largest independent bookstore in Texas. This is our blog.

where crocheting and pop culture collide

Stories in the North

Books for Teens and Young Adults